I found that such piling is called a turtle stack. So, why do turtles stack?

The answer was simple for basking. But is that enough of an explanation for such a wonderful attitude of turtles?

Let’s dig deep into the topic of turtle stacking.

Why Do Turtles Stack?

Turtles will stack to get the best exposure to the UV rays. Hence, while they sit on the basking spot, they will pile one over another. This way, they try to get the maximum out of the sun to meet their UVB rays requirement, which keeps their shell and bone healthy.

When turtles stack, it has two pretty fundaments reasons.

Hence, they stack on each other.

But you may ask “Why do they stack instead of basking individually?”

Firstly, in the wild, open basking spots for turtles are rare. They will have to bask often in logs, woodblock, or on a stone where they get the maximum sun rays. Since these basking spots are scarce, the turtles have to take advantage of whatever they have.

Hence, when they find a proper basking spot, several turtles will pile up. It enables each turtle to bask correctly without having to find another area. 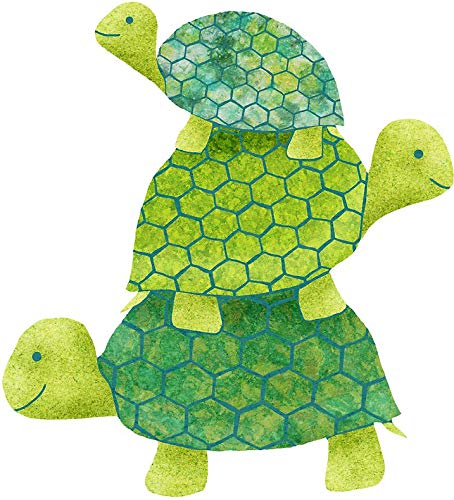 Another Possible Reason for Turtles Piling Up

Although it isn’t a genuine reason, many expert turtle owners believe in it. Similarly, you will find it surprisingly reasonable too.

In the wild, turtles are always at risk of being hunted by large predators. So, they always look for ways to protect themselves from predators.  Stacking up on one another is a possible technique to stop their hunting.

Turtles are small creatures. So, when they bask in a spot standstill, they run the risk of being hunted. When they stack on each other, they look bigger. This way, turtles create an illusion during their basking time and save themselves from predators.

Although it lacks any scientific proof, some experts believe it might be an evolutionary advantage for turtles.

Will Stacking Harm The Turtle At the bottom?

You now correctly know the reasons for turtle stacking when they bask. No doubt, it is a wonderful natural phenomenon.

But, how authentic is the reasons for such anxiety?

The 1st reason is not valid. Research by M. Gordon, D. Hu, and Kelly Sielert on the strength of mammal and reptile shells showed that turtle’s carapace is one of the strongest in the animal world. The research predicted that to damage a 2-kilogram turtle’s shell, it would need at least 360-kilogram bite pressure. It is equal to the biting force of an adult crocodile.

Hence, it is less likely to happen that stacking would hurt the turtle at the bottom. When turtles pile up one another, you will see up to four to five turtles doing so. Also, usually, the weaker or smaller turtle will be on the top.

Furthermore, adult turtles will exchange their positions during stacking on different days. So, a particular turtle won’t stay at the bottom always.

Hence, it is perhaps safe to say that five to six turtles stacking won’t hurt the one at the bottom. It would still be fine and enjoy the basking time.

Also, since turtles will not stay in a fixed position for stacking, they all will receive sufficient UVB rays and warmth in turn. Hence, there’s no possibility of a shortage of UVB rays and heat due to your pet turtles’ stacking practices.

How to Prevent Turtle from Stacking?

I understand that despite having such an in-depth discussion on the actual possibility of turtles getting hurt due to stacking, some of you aren’t convinced. So, you might sincerely and willingly want to find a way to stop your group of turtles from piling up on each other.

Fortunately, the solution to stop turtles stacking is pretty straightforward.

Thus, you should increase the basking area. When turtles find enough room for their basking, they won’t compete for the best locations. This way, they will stop stacking. Additionally, you may arrange multiple basking spots to prevent the piling of turtles.

You should now have the appropriate and correct understanding of why turtles stack. It is an evolutionary advantage for them. They ride one over the other to receive the most warmth and UV rays in a crowded place.

Therefore, they won’t have to look to and fro for multiple basking spots. It is a great relief for these slow-moving animals. Also, they change their position while stacking each day. It means not a particular turtle would stay at the bottom always and be hurt.

Therefore, you should not worry about turtles’ injuries due to stacking. But you can still increase the basking spot to prevent stacking if you want.